Efforts toward Reduction of the Environmental Burden through Vending Machines 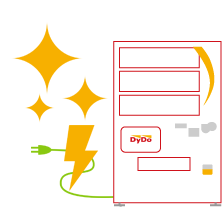 DyDo DRINCO’s constant efforts to improve energy efficiency has led to a 79.5% reduction in the annual power consumption of the major type of its vending machines from FY 2000.

In particular, in 2007, we started the full-scale introduction of vending machines with a heat pump function, which reuses the heat generated when cold beverages are cooled as a source of energy to heat hot beverages. Later, we have employed LED lighting, high-performance vacuum insulators, and other energy-saving components, significantly reducing power consumption.

* Annual power consumption per our vending machine of the major type

In 2002, DyDo DRINCO joined the Green Power Certification System, being the first in the soft drink industry to join it. The company uses the clean energy generated by wind power, contributing to reducing about 400 tons of CO2 emissions every year.

DyDo DRINCO places a sticker on all its vending machines, hoping that as many people as possible will learn about natural energy (green power), a type of energy indispensable to the next generation. 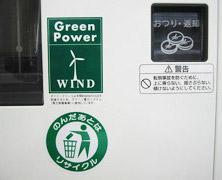 The SDG targets related to our efforts on this page:

7.2 By 2030, increase substantially the share of renewable energy in the global energy mix.